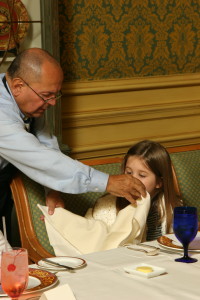 How did the napkin originate and how does one of our most needed dining tools play its most role in etiquette today? How did it become so creatively folded, and beautifully embroidered?

The napkin has a variety of contributions from different cultures. The word originates from Middle English, and nappe from French meaning a cloth to cover a table and the completion of the word with kin meaning family and relatives.

When the meal is concluded place your napkin loosely to the left of your plate or if your plate has been cleared, place in the middle of your own place setting